Journalist Nas Campanella has been reading the news for ABC, and Triple J News to an audience of approximately 1.9 million people. What most don’t know though, is that Campanella has been blind since infancy. According to a Broadsheet Sydney’s report issued in 2014 about Campanella, “the 26-year-old Sydneysider has been blind since she was six months old, when a rare abnormality caused the retinas to tear away from her eyes, leaving her able to see shadows and some light, but little else.” Unfortunately, nothing could be done to save her sight.

Moreover, Campanella can’t read braille. She suffers from Charcot-Marie-Tooth, a  neurological disorder, also known as hereditary motor and sensory neuropathy (HMSN) or peroneal muscular atrophy. This affects both motor and sensory nerves. As a result, her fingertips and hands lack the sensitivity to feel the braille dots on a page.

Campanella loved learning at a fast pace, but she struggled without the means to read on her own. At 10 years old, Campanella was introduced to a software called JAWS screen reader. At that time, it was the only way for a visually impaired person to read without braille. JAWS scans the text on a computer screen and renders it into a synthesized robotic speech. At this point, Campanella was able to push through with her education. Moreover, she found her way in navigating the internet and the computer. This brought significant changes for Campanella.

Her first job is to scour the digital news wire for appropriate stories and breaking news, which is constantly uploaded from the ABC’s state, national and international correspondents. She relies on a speech program called Jaws, an electronic voice that reads what she’s typing.

Her studio is equipped with strategically placed Velcro patches – she operates her own panel – so she can recognise which buttons to push to air news grabs and mute or activate her mic. While she’s reading on air, that same electronic voice reads her copy down her headphones which she repeats a nanosecond later. In another ear the talking clock lets her know how much time she has left. The sound of her own voice is audible over the top of it all. – Broadsheet Media

Her ingenious approach to technology helped Campanella succeed and rose above her challenges. Of course, it won’t be possible without her courage, hard work, and determination. She now inspires a lot of people and frequently gets invited to give motivational speeches.

I guess I often forget that people find it impressive that someone’s reading the news who can’t see. You just get up and do what you do, so it’s nice to hear people get something out of it. – Nas Campanella

It is amazing to see how Text-to-speech and screen readers help the blind and visually challenged navigate the world. The Text-to-speech solution enables any digital content to have its own voice. This has proven to be a solution for those with visual impairments like Campanella. Imagine the other possibilities we can unlock as this technology is further developed and more digital content owners promote this functionality.

Try ResponsiveVoice now and help make your website and content more accessible and responsive to the different needs and desires of your audience. 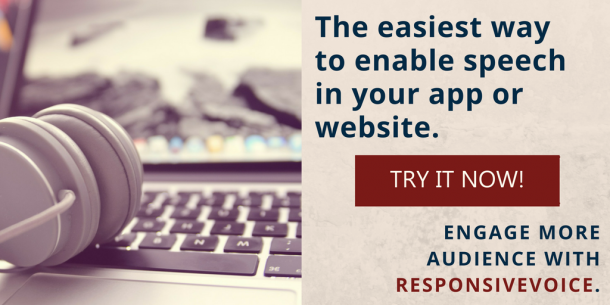 Read more at “Off-air with Nas Campanella” by Broadsheet Media.